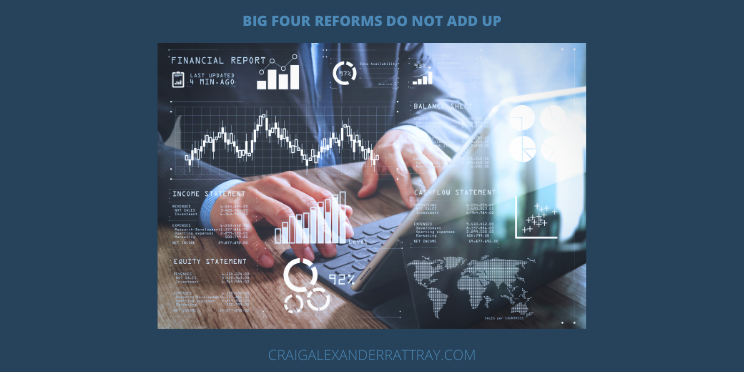 The government is consulting on the future of auditing in an attempt to avoid more major collapses like BHS, Carillion, Thomas Cook and Patisserie Valerie. Proposals include plans to break up the dominance of the “Big Four” accountancy firms – Deloitte, EY, KPMG and PwC – to avoid conflicts of interest. The plans now being considered include a new accountancy watchdog with the ability to make auditors and companies resubmit their accounts, and a requirement for “resilience statements” to check how companies are mitigating risks.

If that isn’t enough, directors of failed companies could see their bonuses clawed back to clamp down on “rewards for failure”.

But will any of it make a difference? I doubt it.

The issue is not whether the Big Four have a dominant market share, or are unduly influenced by fees and retaining clients, or that they audit a significant percentage of the FTSE 100 or the FTSE 350.

Various high-profile collapses have occurred over the years, some not long after audited accounts were signed-off, and I expect that will continue. Why? Because the focus is wrong.

We spend too much time looking back and not forward.

Yes, the audit should address the working capital needs of the business for the next twelve months, but how much focus is placed on that? How much work is done on interrogating the forecasts and looking closely at the cash flow assumptions?

There is an expectations gap with respect to what an audit provides.

The fundamental purpose of the audit is to provide independent assurance that the accounts present a “true and fair” view of a company’s financial performance and position. Some of that can be subjective and may include aggressive and judgemental accounting treatments.

The audit is not designed to identify fraud, and indeed it has been stated that sophisticated frauds are unlikely to be detected during a typical audit especially given the statistical sampling methods adopted.

If we look at some high-profile collapses, what were the causes:

1 Aggressive accounting treatments especially with respect to work-in-progress/long-term contracts/stock, goodwill impairment, and recoverability of sums due.  Such aggressive accounting allows profits to be kept artificially high thereby allowing dividend payments to continue and indeed to increase.

3 A broken business model – no longer profitable and cash generative.

4 Poor, weak or selfish management.  Various members of the Patisserie Valerie board sold shares worth more than £13m only months before collapse.

5 For me, the most important cause is the failure to focus on cash.  There are numerous accounting treatments and tricks that can be used to keep profits high.  However, one thing is almost always 100% correct is the bank position.

Conflicts of interests will always arise.

It is not a competition problem or a market dominance problem.

In my view, the problem relates to what is an audit and what, if any, guarantees does it provide? Until we change that then we will still have the “unexpected” collapse of high-profile companies.

In my experience, very few people care about an audit and what happened last year. It is something that must be done rather than something we want to do.  There is little if any value in it. Think of buying tyres for a car.  We do it because we need to rather than because we want to.

Until an audit can provide some added value to the company, I expect the issues and failures will continue. Why don’t we change what should be included as part of the audit? Why don’t we look at the role of the auditor?

And without doubt, let us focus on looking forward and understand the cash flow dynamics of the business based on its strategic plan, ensure that it makes both commercial sense and that it fits with the operational side of the business, and that the company has adequate financial resources to deliver it.

This should not just be a “tick-box” exercise, but a fundamental part of the audit with some detailed work required. That type of work can add real value to the company and is worth paying for, as it can form a key part of the map for the forward-looking journey.

Only then will we restore business confidence and reduce the number of “surprise” business failures.

This article was first published on Daily Business (https://dailybusinessgroup.co.uk/) on 12 April 2021.